Jazz with extra-large power, for this “African of the city”, as he defines himself. No doubt, this new formula is firmly rooted in jazz, which is still invented here and now, but never forgets where it comes from: the fertile groove of the blues, deeply rooted in Africa. This is what this quartet is talking about, a music as resolutely free as it is deeply rooted in a long tradition, between an all-acoustic ballad and more electric passages, post-bop harmonics and M’Base metrics, sensitive strings of a melodic guitar and superlative rhythm section. There is no doubt that in this quest, which has always pushed Hervé Samb to combine the fertile soil of his origins with the vast field of exploration of contemporary music, he can count on three partners who are in perfect harmony with his intentions.

“We find on Time to Feel all the ingredients that make Hervé Samb one of the African continent’s greatest revelations at the beginning of the twenty-first century: softness and energy of a mega-melodic technique, feline groove, M-Base-influenced meter and circularity, polymorphic sonority encompassing the history of jazz-rock-electro-bop-acoustic, the blues and a transfigured Africa.” JAZZ MAGAZINE, October 2013

“The contrast is captivating between the explosive technique of the Senegalese guitarist (whose sonority seems to change with each chorus) and the fluidity of his rhythm section… with surgical precision, illustrating the perfect synthesis of a music that takes as much from African polyrhythms as urban jazz’s electricity… Sophisticated, epicurean, a gilt-edged jazz.” SELECTION JAZZ NEWS, October 2013

“On his most recent record, Time to Feel, powerful jazz on the edge of rock alternates with the most melancholic of compositions all the more benefiting from the Senegalese tradition, such as the very beautiful “Fathelekou”, in which he manages to reproduce the interweaving of arpeggios and independent melodies of the Mandika kora, and the equally beautiful “Sama Yaye”.” LESINROCKS.COM, September 17, 2013

‘Very attached to those connections tying Africa to African-American music, on Time to Feel the guitarist Hervé Samb digs deeply into the sonorities of his origins in cross-over or jazz compositions to find the cement for his improvisations and melodies.” TSF, DISQUE DU JOUR, September 23, 2013 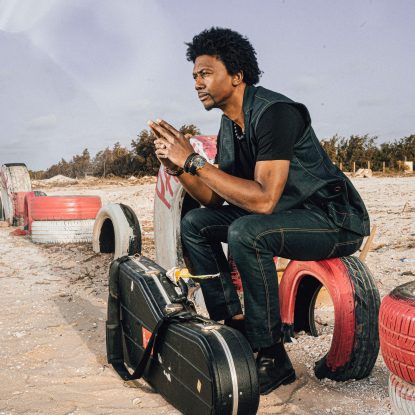